The Murder of Frank Little

Death in the West is a history podcast dedicated to the American West’s strange crimes, unsolved intrigues and the history that shaped, or was shaped by, these events. Our debut season examines the murder of union organizer Frank Little in Butte, Montana during the summer of 1917.

In this season, we’ll spin a tale of assassination, idealism, and long-forgotten national crisis. The cast of characters includes revolutionaries, shady detectives, corporate overlords, and corrupt cops. The setting: the wildest mining city in the West. While the story of Little’s murder is rooted squarely in the turmoil of the early 1900s, its echoes still rattle today, as the nation once again confronts rising nationalism, record wealth disparity and a fracturing political system.

Frank Little: From hardscrabble beginnings in frontier Oklahoma, an itinerant miner rises to prominence as one of America’s most inspiring—and notorious—labor radicals.

The (Other) Radicals: As the bold leader of the Industrial Workers of the World, “Big” Bill Haywood was known for both radical politics and ruthless tactics. Did Little’s rise within the union challenge his power? Elizabeth Gurley Flynn: Renowned in song as “The Rebel Girl,” Flynn allied with Little during wild free-speech protests across the West. Bill Dunne: The two-fisted editor of Butte’s left-wing newspaper, Dunne wrote stories a gun in his lap. (Eventually, Stalin tapped him to lead the US Communist Party.) Did he reveal the true identities of Frank Little’s killers?

The Politicians: An idealistic young US attorney (and future Senator), Burton K. Wheeler refused the Company’s demands to arrest Little. Later, he proposed his own startling theory of the crime. Jeanette Rankin: The first woman ever elected to the US Congress tried in vain to intervene in the chaos engulfing Butte in 1917.

The Copper Kings’ machinations set the stage for the rise of the Anaconda Copper Mining Company: for a time, one of the world’s biggest and most powerful corporations.  John D. Ryan, a brilliant, if ruthless, president headed the Company. Alongside him was the silky, mustachioed, and omnipresent, Roy Alley, who served the Company as its chief lawyer in Butte. But was Alley also a gun-wielding enforcer?

The Cops: Butte’s police department was infamously corrupt. Meet the city’s “finest.” Ed Morrissey: What was the role of Butte’s brutal, boozy top detective? Peter Prlja: Did this prominent motorcycle cop go rogue? Jere “The Wise” Murphy: They said Butte’s police chief knew what everyone in town ate for breakfast. What did he see, hear, and do on August 1, 1917?

Perched high on the Continental Divide, Butte began as a low-down frontier prospectors’ camp. The discovery of some of the world’s richest copper deposits turned it into a bustling center of power.

At its height, Butte was the biggest city between Minneapolis and Seattle. Immigrants from around the world flocked to its round-the-clock mines—while global capitalism’s most powerful interests battled to control its copper.

By 1917, Butte’s streets teemed with action—high and low. Glittering mansions sat blocks from a legendary red-light district; the black gallows frames marking copper mines jutted up amid neighborhoods and shops. Bars, dance halls, boarding houses, and gambling dens gave the city a well-earned reputation for living at the edge of the law.

As Butte produced a huge share of a fast-modernizing world’s copper supply, a key conflict shaped the city. Workers struggled for better wages, safer conditions, and a more just society. Meanwhile, Butte’s mines ultimately enthroned one of the world’s most powerful corporations: the conglomerate called Anaconda.

In the summer of 1917, those two forces collided, with fatal results. 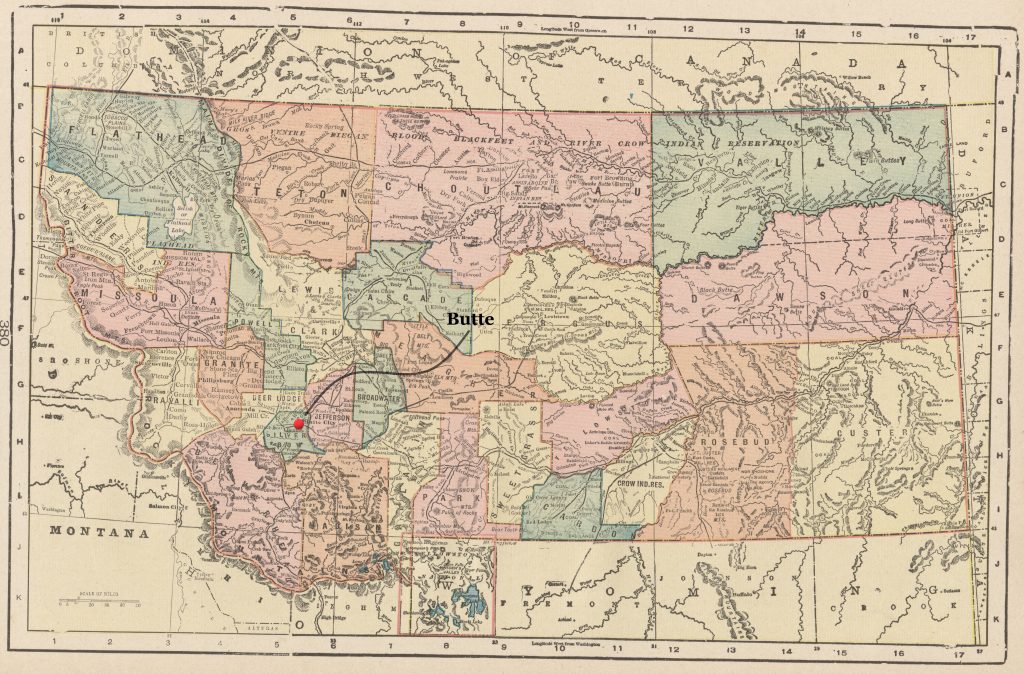